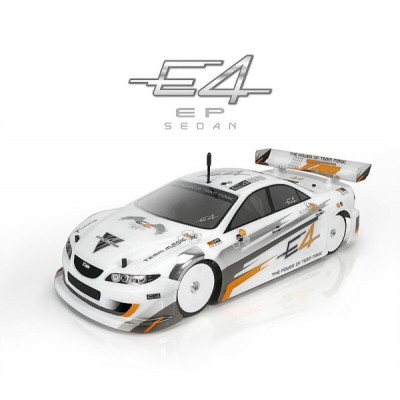 local_shipping Receive your order in 24H at Portugal shipped by RTR Modelismo. Details 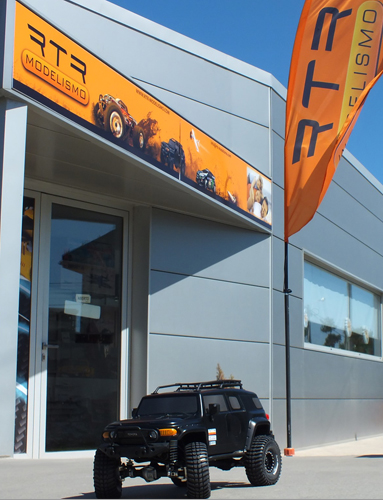 Back in October 2006, pictures of Team Magic's up and coming on-road electric touring car were beamed around the world via the internet. As an early prototype, it immediately captured the attention of the R/C world. From its unique styling to its complex nature, every part of the car was totally unique and offered an insight into where touring car chassis design was heading. Eleven months on, and Team Magic have quietly continued to develop and enhance the new car until it has reached its current state. With testing complete, it's time for Team Magic to introduce the latest step forward in electric touring car technology; the Team Magic E4.

Let's take a closer look at some of the key features of the E4 -- the ultimate on-road racing machine:

Another unique design feature of the E4 is the introduction of a 3 belt transmission. It was chosen because of its advantages in motor, battery and radio gear placement. In a classic two belt transmission system, the front belt is centered down the chassis. This layout restricts the design of the car greatly and forces the manufacturer to compromise in componentry layout. The E4 is exactly the opposite which meant no compromises!

Team Magic has also included a beautifully machine aluminum front dual action one-way/spool differential. With the pins inserted the differential acts like a spool. Remove two pins and the diff turns into a one-way. This allows the driver to customize the transmission to suit individual track requirements. In addition to this, the pulleys and center mount are also machine from the same high quality aluminum for improved pulley and belt durability. The rear of the car features a fully adjustable ball differential.

The whole system is set in motion by super low friction belts. The placement and size of the teeth on the belts were designed to be a perfect balance between durability and low friction.

All in all, the advantages of the three belt transmission system outweighed the minimal increase in transmission friction. Top speed can be easily found, lightning quick corner speed cannot.

Centralized Componentry For Perfect Side To Side Balance:
With the belts out of the way, the designers got to work tweaking weight distribution so both sides of the car were equal. They focused on making sure the heaviest components, like the battery and motor were either centralized on the chassis or very close to it. After a few modifications, they achieved their goal and the E4 now has a perfect side to side balance. This gives the E4 another advantage through the corners by letting the car change direction much quicker. With all the weight placed in, toward the middle of the chassis the E4 also has a very neutral feel and there's less chance of the chassis rolling over. Now you can push the boundaries when it comes to corner speed like never before.

As all the components moved inward, the main chassis plate began to shrink. This reduced the overall weight of the car, again, improving its performance.

An exclusive design from Team Magic is the Flying Wing Suspension arms found on the E4. This new manufacturing process allowed Team Magic to reduce the size of the suspension arms without sacrificing strength. A lightweight, hollow aluminum rod gives the suspension arm its potent strength and provided the E4 designers with an opportunity to remove or shape excess plastic from around each arm. Both options offer interesting benefits to improving the E4's performance.

The removal of excess plastic helped to not only lower the chassis total weight but also meant the shocks didn't have to cope with additional loads. This improved the E4's acceleration and ability to cope with a bumpy track or surface.

Next, Team Magic set about shaping the arm to serve two purposes; firstly the removal of any holes in the arm makes it much easier for cleaning and secondly, the shape of the arm was molded to help improve airflow. The airflow runs smoothly over the arm and this helps the E4 cut through the air, reducing its drag co-efficient dramatically.

Super Easy Maintenance
The fun doesn't stop there though because the E4 is also an absolute charm to work on too! The design of the car incorporates quick and easy access to all of the high maintenance areas of any on-road touring car. Take for example, the front and rear differentials. Only four screws hold each differential securely in place. Undo these 4 screws and you now have the ability to lift the entire differential out of car with ease. Make some changes or give it a clean, then drop the diff back in, tighten up the 4 screws and you're ready to race again. Nothing could be easier.

The same applies for the main layshaft which is also held in place by only 4 screws. Slide the belts off the pulleys and lift the entire layshaft out of the car. These quick maintenance features flow right throughout the entire E4 chassis. From the wheels up, the E4 is the ultimate user-friendly touring car on the market.

A fundamental consideration in manufacturing a high performance on-road touring car chassis is making sure the major components of the vehicle are placed as close to the ground as possible. This gives the car a low center of gravity for increased cornering speed and improved road holding capabilities. The E4 is a perfect illustration how this can be accomplished with creative precision.

The motor and battery pack can account for almost 40% of the cars entire moving mass so it's critical they are given priority in positioning. The motor area of the E4 is machined away to lower the motor a total of two millimeters past the top of the main chassis plate. This may seem like a small gain, but with this design the motor is potentially just 1mm away from the ground. It would be impossible to get it any lower without placing it in undue risk from potential damage.

The battery pack, which is inserted into the chassis from the bottom of the car, receives the same treatment as the motor. Held in place by an aluminum battery tray, the cells are just fractions of a millimeter from being flush with the bottom of the chassis, but at the same time, totally protected. The aluminum tray also aids in dispersing heat from the battery pack.

With the battery being inserted from the bottom of the car, Team Magic's designers were able to lower the top-plate too. This in turn, meant the gearboxes, bulk heads, differentials and steering system were able to follow the same pattern. A low center of gravity chassis gone to the extreme.

Have no doubts about the E4, its unique and fast, all in one convenient package! We look forward to bringing your more details of the E4 soon.

Below is the E4 video: (23T motor is used in the video) (If you have any problems watching the video, please tell us.)

The narrowest chassis at the market--89mm

This site uses cookies. By continuing to browse the site you are agreeing to our use of cookies. Find out more here.