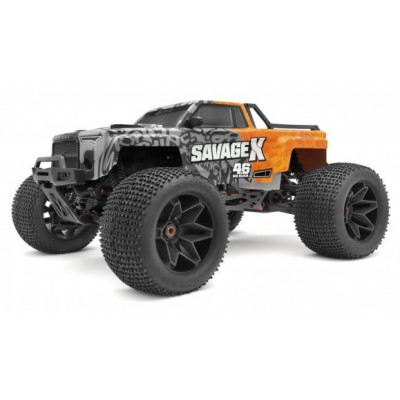 €699.95
Tax included
Notify me when available

local_shipping Receive your order in 24H at Portugal shipped by RTR Modelismo. Details

The smoke, the noise - Nothing beats NITRO and that's why HPI is going all out for our Internal Combustion fans. While our competitors play it safe with electric, we know that real trucks have engines! Let's check out whats new with the Savage X 4.6 GT-6:

The massive F4.6 Big Block engine is designed for one thing and one thing only - huge amounts of horsepower! Nearly 3hp, in fact! Enough horsepower to get the Savage X 4.6 to speeds over 45mph (73kph)!  And Big Block TORQUE is always on tap, just pull the throttle for instant thrills.

The developments in this latest Savage X 4.6 mean the same great Super HD Drivetrain is now at the heart of all HPI Savages. With this and the new rugged bumpers, captured hinge pins and Bulletproof differentials - you're ready to deal with every bit of the boosted torque and acceleration from the Nitro Star F4.6 V2 Big Block engine - All-out smoke filled bash sessions and speed runs!!